The first blog post in this series ( http://bit.ly/2v8mXJm ) I listed the top ten skills necessary if you are to triumph in the ongoing upheaval in the worldwide job market.  Today, I want to discuss the #3 skill, Creativity. 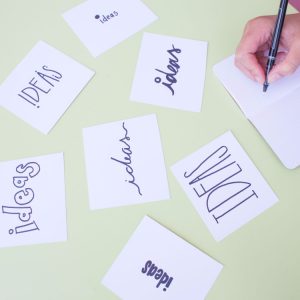 Why is Creativity so Important?

There is one simple reason why creativity as a skill is so much in demand.  Robots and software technology can’t do it.  Here is one area where human beings can beat the bots.  Every time.

I have a favorite saying I think sums up the need for creativity in the business world.  It comes from General George Patton, the famous tank corps commander in World War II. “The best battle plan in the world isn’t worth a damn after the first shot is fired.”

General Dwight Eisenhower also weighed in on this subject when he said, “Plans are useless, but planning is essential.”

Freelancers know this.  When it all goes to hell, you’re going to have to get creative and think your way out of it.

How Can You Define Creativity?

I admit this is hard.  Creativity is one of those things that everyone knows when they see it, but find it difficult to define.

Let’s take a shot at it.  Creativity is:

There are more.  Here is a link taking you to a Copyblogger Post with 21 different definitions of creativity ( http://bit.ly/2jEEKTH ).  (Hint… the list starts about halfway through the post).

Can I learn to be more creative?

How many times have you heard it?  “I’m just not a creative person.”

Wanna bet?  Actually, we all start out being very creative, and then we unlearn it.  In 1968, a man by the name of George Land devised a test to measure creativity ( http://bit.ly/2ykJSzE ).  He then gave the test to 1600 children, age 3 to 5 years, enrolled in a Head Start Program.  The results were amazing.  The 5-year-old kids scored 98% on the creativity test.  He retested the same kids 15 years later.  Guess where they scored? 12%.  Adults given the same test scored 2%.

This means our society is teaching us to unlearn creativity.

So it’s really not an issue of learning to be more creative.  It’s remembering how to be as creative as we once were.

The common misconception is that creativity belongs to artists, writers, musicians, and maybe a few computer geeks.   Nothing could be further from the truth.  We are all creative. Like all skills, it is one where proficiency is gained by practice.

Remember the old joke? A kid carrying a violin case goes up to a cop in New York City and asks, “How can I get to Carnegie Hall?”  The cop looks at the kid and says, “Practice, practice, practice.”

The best part is improving creativity is fun. A lot of fun.

I’m Sold. Where Can I go to Learn?

Online of course.  Google “Learn to be Creative.”  You’ll get more than a million results.

Now as for books?  One of the best I have ever read on this subject is “The Artists Way, A Spiritual Path to Higher Creativity,” by Julia Cameron.  I read this book when it first came out over 25 years ago when I wanted to begin developing my writing skills.  I have reread at least 3 times since then.  Don’t be put off by the title.  This book is considered the seminal book on creativity.  It’s for people in every walk of life seeking to enhance their creativity skills.  There is also a great workbook that goes along with it I would recommend as well.

I have included links below if you would like to get these outstanding books. (Full disclosure, I am an Amazon Affiliate)